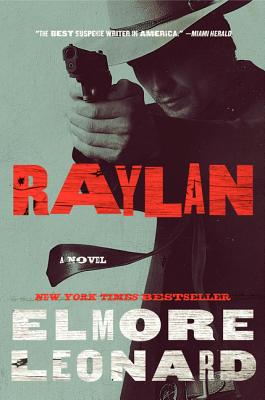 By Elmore Leonard
Email or call for price
Hard to Find

With more than forty novels to his credit and still going strong, the legendary Elmore Leonard has well earned the title, “America’s greatest crime writer” (Newsweek). And U.S. Marshal Raylan Givens (Pronto, Riding the Rap, Fire in the Hole) is one of Leonard’s most popular creations, thanks in part to the phenomenal success of the hit TV series “Justified.” Leonard’s Raylan shines a spotlight once again on the dedicated, if somewhat trigger-happy lawman, this time in his familiar but not particularly cozy milieu of Harlan County, Kentucky, where the drug dealing Crowe brothers are branching out into the human body parts business. Suspenseful, darkly wry and riveting, and crackling with Leonard’s trademark electric dialogue, Raylan is prime Grand Master Leonard as you have always loved him and always will.

Elmore Leonard wrote more than forty books during his long career, including the bestsellers Raylan, Tishomingo Blues, Be Cool, Get Shorty, and Rum Punch, as well as the acclaimed collection When the Women Come Out to Dance, which was a New York Times Notable Book. Many of his books have been made into movies, including Get Shorty and Out of Sight. The short story "Fire in the Hole," and three books, including Raylan, were the basis for the FX hit show Justified. Leonard received the Lifetime Achievement Award from PEN USA and the Grand Master Award from the Mystery Writers of America. He died in 2013.

“A punchy mix of crime and Kentucky coal-mine sociology . . . It’s one of Leonard’s best thrillers in years.”
— Entertainment Weekly

“With a practised ease and the craft of more than half a century of novelistic composition, Leonard works like the Picasso of crime fiction . . . Raylan is as close as it gets to creating the complete illusion of unmediated entertainment on the page.”
— San Francisco Chronicle

“The smarter crooks give Raylan grudging respect; his fellow lawmen grant him their highest praise: ‘You’re doin’ a job the way we like to see it done.’ The same can be said of the 86-year-old Elmore Leonard.”
— Wall Street Journal

“[Leonard’s] finely honed sentences can sound as flinty/poetic as Hemingway or as hard-boiled as Raymond Chandler. His ear for the way people talk—or should—is peerless.”
— Detroit News

“There is no greater writer of crime fiction than Elmore Leonard, and no one who has more resplendent energy. . . . Like pretty well every Leonard novel, Raylan is a delight.”
— The Guardian (UK)