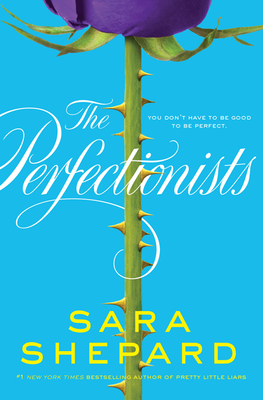 This is book number 1 in the Perfectionists series.

Perfectionists by Sara Shepard is the beginning of an exciting and suspenseful new series. In Beacon Heights, the only thing acceptable is perfection. You need to be the best athlete or the best musician or the most popular girl and of course get into the best college. However, this doesn’t mean you have to be good. So when five girls realize that they all hate the same person it is easy to plan his murder-or at least his hypothetical murder. But what happens when someone follows through with the murder? How can you prove your innocence when the deck is stacked against you? Thus begins the Perfectionists series.

If you have enjoyed Pretty Little Liars, then you are sure to love this series too. Shepard is so good at getting you all tangled up trying to figure out who the killer is. Each time you think you have a clue you end up right back where you started. The characters are fun to follow and have just enough personal drama to make you want more. This is a great beach read.

From Sara Shepard, #1 New York Times bestselling author of the Pretty Little Liars series, comes a series that’s perfect for fans of One of Us Is Lying and We Were Liars.

Ava, Caitlin, Mackenzie, Julie, and Parker are all driven to be perfect—no matter the cost.

At first the girls think they have nothing in common, until they discover that they all hate the same person: handsome womanizer Nolan Hotchkiss, who's done things to hurt each of them.

They come up with the perfect plan to murder Nolan—jokingly, of course. They'd never actually go through with it. But when Nolan turns up dead in the exact way they'd discussed, the girls suddenly become prime suspects in his murder.

Only, they didn't do it.

So who did? Unless they find the real killer, and soon, any one of them may be the next to die…

“Fans of Pretty Little Liars will line up for this new-but-familiar guilty pleasure.”
— Bulletin of the Center for Children’s Books

Praise for PRETTY LITTLE LIARS: “An intriguing tale full of provocative exploits and adventure…It will not disappoint the fans.”
— Voice of Youth Advocates (VOYA)

“Shepard writes a suspenseful page–turner that will have teens thirsting for more.”
— School Library Journal

“Expect this teenage soap opera to fly off the shelves.”
— Voice of Youth Advocates (VOYA)

Praise for THE LYING GAME: “The Lying Game is a stay–up–past–your–bedtime type of thriller…full of amazingly believable plot twists and turns.”
— Voice of Youth Advocates (VOYA)

“A fun and fast–moving mystery…[readers] will race through the pages as Emma pieces together clues.”
— Publishers Weekly