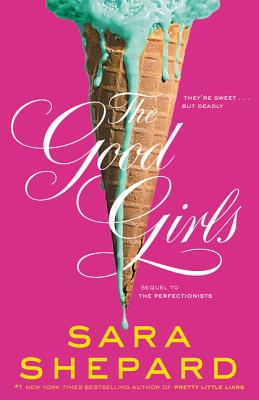 This is book number 2 in the Perfectionists series.

From Sara Shepard, author of the #1 New York Times bestselling Pretty Little Liars, comes the shocking finish to The Perfectionists, a series perfect for fans of One of Us Is Lying and We Were Liars—with an ending you’ll have to read to believe!

Mackenzie, Ava, Caitlin, Julie, and Parker have done some not-so-perfect things. But even though they all talked about killing rich bully Nolan Hotchkiss, they didn’t actually go through with it. It’s just a coincidence that Nolan died in exactly the way they planned . . . right?

Except Nolan wasn’t the only one they fantasized about killing. When someone else they named dies, the girls wonder if they’re being framed. Or are they about to become the killer’s next targets?

“The terrible and frightening things the mind can do under stress and shock play out beautifully.”
— Booklist

“A fast–moving plot that uses suspense to propel the mystery of finding the killer…[with] a plot twist that catches readers completely off guard.”
— Voice of Youth Advocates (VOYA)

Praise for THE PERFECTIONISTS: “Suspenseful and juicy.”
— Kirkus Reviews

Praise for THE PERFECTIONISTS: “Thoroughly unputdownable. Fans of the author’s Pretty Little Liars series and the Lying Game series won’t be disappointed.”
— Booklist

Praise for PRETTY LITTLE LIARS: “An intriguing tale full of provocative exploits and adventure…It will not disappoint the fans.”
— Voice of Youth Advocates (VOYA)

“Shepard writes a suspenseful page–turner that will have teens thirsting for more.”
— School Library Journal

“Expect this teenage soap opera to fly off the shelves.”
— Voice of Youth Advocates (VOYA)

Praise for THE LYING GAME: “The Lying Game is a stay–up–past–your–bedtime type of thriller…full of amazingly believable plot twists and turns.”
— Voice of Youth Advocates (VOYA)

“A fun and fast–moving mystery…[readers] will race through the pages as Emma pieces together clues.”
— Publishers Weekly