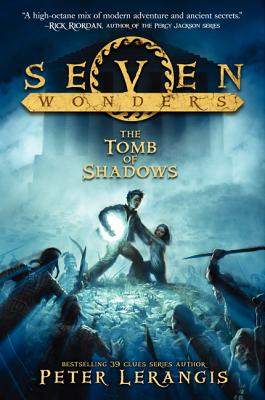 This is book number 3 in the Seven Wonders series.

The Tomb of Shadows is the third book in a seven-book series by master storyteller Peter Lerangis. This sequel to the bestselling Lost in Babylon and The Colossus Rises chronicles the adventures of Jack McKinley and his friends in a life-or-death race to the Mausoleum at Halicarnassus. In the rubble of this Wonder of the Ancient World, they have to face down their own demons and engage in an epic battle with foes long gone. But when promises are broken, blood is spilled—and the Select are left with no choice but to destroy the one thing that might have saved them all.

Rick Riordan, author of the Percy Jackson series, praised Seven Wonders Book 1: The Colossus Rises as "a high-octane mix of modern adventure and ancient secrets. Young readers will love this story. I can't wait to see what's next in the Seven Wonders series!"

Peter Lerangis is the author of more than one hundred and sixty books, which have sold more than five and half million copies and been translated into thirty-three different languages. These include the five books in the New York Times bestselling Seven Wonders series, The Colossus Rises, Lost in Babylon, The Tomb of Shadows, The Curse of the King, and The Legend of the Rift, and two books in the 39 Clues series. He lives in New York City with his family.

“A great mix of adventure, mystery, and suspense.”
— Time for Kids

“The quick action, high stakes, and clever solutions make this a slam dunk.”
— ALA Booklist

“A high-octane mix of modern adventure and ancient secrets, The Colossus Rises is Lerangis’s most gripping work yet. Young readers will love this story. I can’t wait to see what’s next in the Seven Wonders series!”
— RICK RIORDAN, #1 New York Times bestselling author of The Kane Chronicles and Percy Jackson and The Olympians

“Fans will get hooked on the mysteriousness of it all!”
— Kirkus Reviews