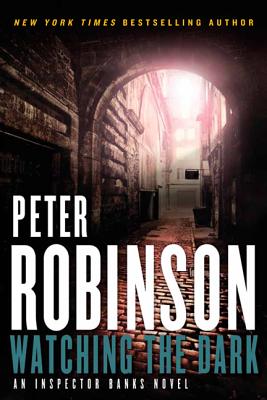 This is book number 20 in the Inspector Banks Novels series.

Peter Robinson’s new book Watching The Dark was fabulous. I have loved inspector Banks since the first book and have enjoyed his evolution throughout the years.  Detective Inspector Bill Reid is murdered at the St Peter’s Police Treatment Center, thus  creating a sensitive case for Detective Chief Inspector Alan Banks.  To make things even more challenging an Inspector from Professional Standards is assigned to the case to keep an eye on Bank’s investigation.  As he continues to look into the officer’s death, he realizes this case is linked to a cold case involving the disappearance of an English girl in Estonia.  Meanwhile, his college Detective Inspector Annie Cabot uncovers a labor scam involving corrupt bureaucrats that is somehow linked to Bank’s case.

As previously mentioned, this was fabulous.  I loved all of the police procedures and the details of opening an old case.  It was interesting to read a story that highlights the choices a young cop makes and how that effects his life years later.  I also really liked all of the different cultures in this story.  I learned so much about Estonia.  I was completely immersed in this book and couldn’t put it down till the very end.  This is an excellent British mystery series.  If you are looking for other series similar to Robinson’s style, try a Deborah Crombie or Stuart MacBride mystery novel.

A decorated detective inspector is murdered on the tranquil grounds of the St. Peter's Police Treatment Centre, shot through the heart with a crossbow arrow, and compromising photographs are discovered in his room. Detective Chief Inspector Alan Banks is well aware that he must handle the highly sensitive—and dangerously explosive—investigation with the utmost discretion.

Because the case may involve police corruption, an officer from Professional Standards, Inspector Joanna Passero, has arrived to work with Banks and his team. Though he tries to keep an open mind and offer his full cooperation, the dedicated Banks and his practical investigative style clash with Passero's cool demeanor and by-the- book professionalism. All too soon, the seasoned detective finds himself under uncomfortable scrutiny, his methods second-guessed.

As Banks digs deeper into the life and career of the victim, a decorated cop and recent widower named Bill Quinn, he comes to believe that Quinn's murder may be linked to an unsolved missing persons case. Six years earlier, a pretty nineteen-year-old English girl named Rachel Hewitt made national headlines when she disappeared without a trace in Tallinn, Estonia. Convinced that finding the truth about Rachel will lead to Quinn's killer, Banks follows a twisting trail of clues that lead from England to the dark, cobbled alleys of Tallinn's Old Town. But the closer he seems to solving the complicated cold case, the more it becomes clear that someone doesn't want the past stirred up.

While Banks prowls the streets of Tallinn, DI Annie Cabbot, recovered from her near-fatal shooting and back at the station in Eastvale, is investigating a migrant labor scam involving corrupt bureaucrats and a loan shark who feeds on the poor. As evidence in each investigation mounts, Banks realizes the two are linked—and that solving them may put even more lives, including his own, in jeopardy.

The Inspector Banks novels have received numerous awards for their crisp narratives, breath-taking action, and atmospheric settings
— The Tuscon Citizen