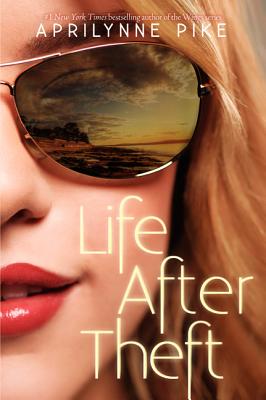 Aprilynne Pike, #1 New York Times bestselling author of the Wings series, shines in this stand-alone novel that offers a humorous twist on ghosts and is perfect for fans of Ally Carter, Rachel Hawkins, and Kiersten White.

Kimberlee Schaffer thinks she's doomed to an afterlife of boredom, stuck haunting the halls of her high school for eternity . . . until the day she meets Jeff. He's the only person who's ever been able to see Kimberlee, so she needs him to help with her unfinished business. When she was alive, Kimberlee wasn't just a mean girl; she was also a complete kleptomaniac. If Jeff wants to avoid being haunted until graduation, he'll have to help her return everything she stole. But Jeff soon discovers that it's much easier to steal something than it is to bring it back.

Paying for your mistakes takes on a whole new meaning in this clever and exhilarating modern retelling of The Scarlet Pimpernel. Kirkus Reviews called Life After Theft "a brisk, down-to-earth thriller," and School Library Journal proclaimed it a "whirlwind adventure full of secrets, lies, unlikely friendships, and romance." This paperback edition also contains an excerpt from Aprilynne Pike's next novel: Sleep No More.

“In a refreshing departure from her plant-based paranormal-romance series, Pike develops the pleasantly fractious relationship between Jeff and Kimberlee in Jeff’s earthy, humorous first-person. This brisk, down-to-earth thriller should appeal equally to male and female readers.”
— Kirkus Reviews

PRAISE FOR THE WINGS SERIES: “WINGS is a remarkable debut; the ingenuity of the mythology is matched only by the startling loveliness with which the story unfolds.”
— Stephenie Meyer, bestselling author of the Twilight Saga

Mixing a little bit of Harry Potter and a lot of Twilight, Pike has hit on a winning combination. Yet it is her own graceful take on life inside Avalon that adds a shimmering patina sure to enthrall readers.”
— Booklist (starred review)

“Pike’s clever and innovative way of reinventing fairy tales and myths to make them her own is wonderful...[The] story is rich in vivid details, action, adventure, and romance.”
— Romantic Times (Top Pick)

“The series is action-packed, and the final chapters of the story are no exception. A thrilling page-turner, many readers will read the book cover-to-cover, barely daring to breath.”
— Voice of Youth Advocates (VOYA) (starred review)

“SPELLS is brilliant and lovely. Aprilynne Pike’s talent just continues to bloom and I am almost afraid to see how awesome her next book will be.”
— Carrie Jones, New York Times bestselling author of the Needs series

Who knew faeries could be this cool? ILLUSIONS has it all. It’s fascinating, rich, and romantic, and weaves a great new tapestry of thrilling fantasy.”
— Lisa McMann, New York Times bestselling author of the Wake series