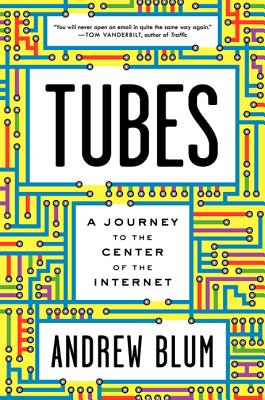 By Andrew Blum
Email or call for price
Hard to Find

“Andrew Blum plunges into the unseen but real ether of the Internet in a journey both compelling and profound….You will never open an email in quite the same way again.”
—Tom Vanderbilt, New York Times bestselling author of Traffic

In Tubes, Andrew Blum, a correspondent at Wired magazine, takes us on an engaging, utterly fascinating tour behind the scenes of our everyday lives and reveals the dark beating heart of the Internet itself. A remarkable journey through the brave new technological world we live in, Tubes is to the early twenty-first century what Soul of a New Machine—Tracy Kidder’s classic story of the creation of a new computer—was to the late twentieth.