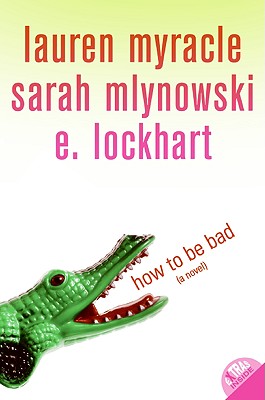 From the authors of ttyl, Bras & Broomsticks, and The Boyfriend List come three unforgettable characters—and one exhilarating novel

Vicks is the wild child whose boyfriend has gone suspiciously quiet since he left for college; Mel is the newcomer desperate to be liked; and Jesse will do anything to avoid a life-altering secret. Each one has her own reason for wanting to get the heck out of their nowheresville town, even just for the weekend. So they climb into Jesse's mom's "borrowed" station wagon and head south.

Hearts will be broken, friendships will be tested, and a ridiculously hot stranger could change the course of everything.

Lauren Myracle has written many books for tweens and teens, including the bestselling Winnie Years series and the Flower Power series. She lives with her family in Colorado, and she thinks life is the most magical adventure of all. www.laurenmyracle.com

E. Lockhart is the author of many YA novels, including We Were Liars and The Disreputable History of Frankie Landau-Banks. She was voted worst driver in her senior class in high school.

Sarah Mlynowski is the bestselling author of Ten Things We Did (and Probably Shouldn’t Have); I See London, I See France; Don’t Even Think About It; Think Twice; Milkrun; Fishbowl; Bras & Broomsticks; the Whatever After series; and more. Her books have been translated into twenty-nine languages and optioned to Hollywood. Sarah was born in Montreal but now lives and writes in New York City. Visit her at www.sarahm.com and find her everywhere @sarahmlynowski.

“Whip-smart dialogue and a fast-moving, picaresque plot that zooms from lump-in-the-throat moments to all-out giddiness will keep readers going, and it’s a testimony to how real these girls seem that the final chapters are profoundly satisfying rather than tidy.”
— Publishers Weekly (starred review)

“The authors’ styles blend seamlessly, folding three characters’ distinct voices into a funny, poignant story about facing your troubles with friends at your side.”
— ALA Booklist