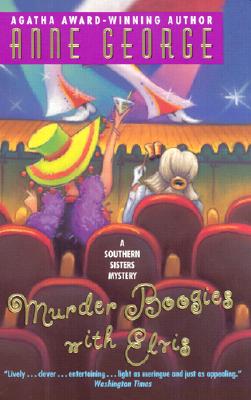 Oversized, outrageous Mary Alice and her prim sister Patricia Anne have been looking forward to the gala benefit being staged to raise money for the restoration of Vulcan, Birmingham's ever-tarnishing unnatural wonder. And what a show it is, with a grand finale that has thirty sequined Elvis impersonators high-kicking in unison! From the front row, "Mouse" and "Sister" have a perfect view of the action when one of the dancing Kings keels over dead into the bandstand. This Elvis clone has not only left the building ... he's left this life, courtesy of a switchblade knife in the back. And when the murder weapon turns up in Patricia Anne's very sensible purse, the perennially law-abiding "Mouse" is understandably all shook up. Suspicious minds have her pegged as the prime suspect in this bizarre case of Elvis elimination. And if she doesn't do some serious sleuthing, she could end up doing the Jailhouse Rock!

Anne George (c.____ - 2001) was the Agatha Award-winning author of the Southern Sisters mystery series which culminate in Murder Boogies with Elvis, publishing in August 2001. Like Patricia Anne, she was a happily married former school teacher living in Birmingham, Alabama. Ms. George was also a former Alabama State Poet and a regular contributor to literary publications. During her lifetime she was nominated for several awards, including the Pulitzer. Being a true lady of the Old South, her date of birth will forever be a mystery.